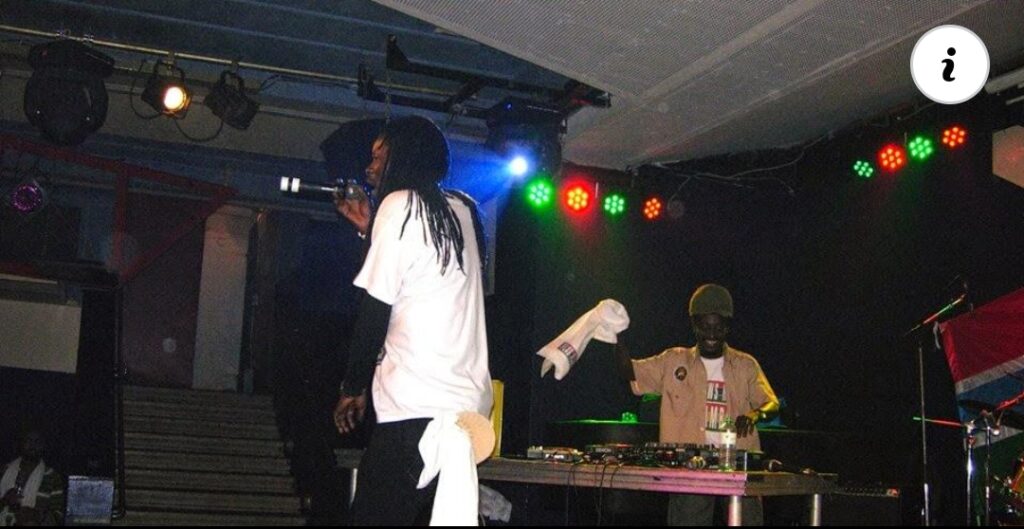 Reggae artist Nu Chilly, born Wally Bobb, started his musical career by singing with local drumming groups in Gambia from a young age. He joined a group called Roots Calypso, where he sang lead vocal for 5 years before deciding to travel to Europe in 1995 to further his career.

He later met members of the Suns of Light who motivated him to produce music with the passion he is known for today. He then studied music Basic Knowledge at The Hi-tech Sunland Music School, an endeavor that greatly helped him with his quest. Becoming an international force with PROMOTION all over Europe, he worked with the „Movement“ for a compilation in 2004 in the united kingdom .

It was with the movement that Nu Chilly released his debut single, „Nu Chilly Rise“. The hit took Gambia by storm, with its memorising beat travelling off-shore out of Gambia to Europe and the UK.The track, which would go on to be featured on the 18 track album “By the Rivers of Gambia (2012)”, resulted in Nu Chilly still have the spirit of working with Hakim of the Suns of Light (the producer of Akon’s Mama Africa). Alongside Hakim, Nu Chilly teamed with Culture Brown (Love is What the Children Want) and Chuck Fenda (Nu Chilly Rise Remix) to produce the formerly mentioned debut album that seeped through the vines of the Gambian Reggae scene on to the international stage.

“Nu Chilly Rise” shot further up in fame with the release of its video, directed by Yankuba Jarju of Amics Digital, in his czonex emblem.Nu Chilly now resides in the UK where he has now begin to have lots of Radio Air play , where PROMOTION on „By the Rivers of Gambia“ has seen him work internationally with a large variety of other well-known artists, creating a firm and loyal fan base. After extensive touring in 2011 of Holland, Germany, the UK and Austria, he finally reached his home of Gambia, where he was met with overwhelming support from the media.Nu Chilly is Gambia Home grown and UK based Artist ,he never stopping with his work and passion as an artist, Nu Chilly is enjoying his time spent on working on his upcoming album “I Offer You Love”.

The title track of the album, that featured Hakim, was released in March of 2013. The thoughtful and contemplative track followed its equally as moving predecessor, “Cut Off For Life (December, 2012)”, the first single of the album, dealing with the harrowing realities of family troubles.Following the first two singles, Nu Chilly refused to keep his fan base waiting for more, and gave them the soulful “Princess” in September of 2013… Only to succeed it in March of 2014 with the upbeat; uplifting and moving single, Mama Remix, that featured UK artist Queen Sharon. Nu Chilly is currently preparing for the summer of 2014, where he will be touring internationally, beginning in the United Kingdom as early as May.

He will be in Austria, Germany and Scotland ,Wales ,New Castle ,London throughout the summer, PROMOTING his upcoming second album and performing music from both of his albums.With many updates and projects involving GSC Records; Hardcore Productions and many more coming soon, we strongly recommend that you keep a watchful eye on the ever-growing Nu Chilly. As of 2014,  in 2015  toured Vienna and bayern germany with olugander 24 and 25th september which was organised by Dj Taff of Jah Love sound one of the biggest gambian promoters in Europe and event organiser in october 2015 staged with ioctane in Berlin germany which was organised by mighty timelessound also one of the top  gambian promoters in europe just to name a few Nu Chilly  is looking to further his reach in the reggae scene and has openly said that he is willing to work with other record labels and producers anywhere around the world he’s also working with GSC Records / Malang Fatty to finish part of his Album . He released tunes like Proud Gambians ,No Condition is Permanent , Holy Smoke and Love4life  featuring Hakim most of which are from his up coming  Album and Nu Chilly is fluent in Swedish, German and English, and he can speak French and Norwegian to a reasonable standard. The singer and performance artist also writes his own lyrics.